Klockia är auktoriserad återförsäljare av Longines. Med varje Longines-klocka med automatverk medföljer ett internationellt garantikort som är giltigt i 5 år
The Longines Heritage Classic – Tuxedo: a glimpse into the wild parties of the later 1940s
Longines offers two new models inspired by historical pieces with the typical aesthetics of the regained freedom of thelate 1940s. You can easily imagine it on the wrist ofpartygoers at jazz clubs. They have been nicknamed”Tuxedo” by collectors, the contrast of black and white ontheir dial reminds us of the suits worn during the elegant andfestive evenings of the time.
To respect the spirit of the original models, Longines has chosen here not to add the word “Automatic” on the dials. Inkeeping with the aim to create timepieces that are as faithfulas possible to historical timepieces, there is also no datewindow on contemporary models, which are presented onsemi-matt black leather straps, perfectly in keeping with thespirit of the era.
Longines celebrates the carefree spirit of the late 1940s. After the harsh war came a time of prosperity and celebration.
Elegance was back in fashion; men wore suits and women wore recently-introduced nylon stockings. People got dressed up togo out and dance to the rhythm of jazz bands. The new Longines Heritage Classic – Tuxedo creations – one with 3 hands andthe other featuring a chronograph – are inspired by two historic pieces designed in the spirit of their time, modernised.
The Longines Heritage Classic – Tuxedo is available in two versions: a 3-hand model and a chronograph model.The former stands out for the aesthetics of its dial, atypical and very popular design from the 1940s. Anopaline silver disc surrounded by a sublime matt blackcircle of thin baton hands covered with Super-LumiNova®. The small seconds counter, located at 6o’clock, is off-centre: this detail contributes to the charmof this 38.50 mm-diameter timepiece housing theexclusive L893.5 movement with its silicon balancespring, a guarantee of quality and precision.
The chronograph version displays matt black, opaline and midnight blue, colours as elegant as they are refined.Several zones feature on its dial, and a tachymetric scale- quite rare for a Longines watch – also enriches itscircumference, just like on the original model. TheLongines Heritage Classic Chronograph – Tuxedo housesin its 40.00 mm-diameter case a movement (calibreL895.5) developed exclusively for Longines Heritagetimepieces. It is also equipped with a silicon balancespring.
With its two new models in contrasting black and white, The Longines Heritage Classic – Tuxedo brings us back tothe intensity of a colourful era that brought back parties! 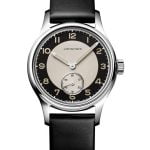